Danger in the Air: Inhalation Exposure in Fentanyl Clean Up

If you are a property owner, the chance that one of your properties will be used to process or distribute fentanyl or one of its derivatives is growing. Because fentanyl is generally produced elsewhere then shipped to distributors across North America, you are more likely to encounter it inside labs producing other drugs or inside distribution centers where they cut, package and send fentanyl and drugs that have been cut with fentanyl out onto the streets.

Although a distribution lab does not always contain the chemicals and equipment that makes a production lab so dangerous it does pose its own risks. During the cutting and milling process, fentanyl is released into the air and distributed throughout the building on air currents. This aerosolized fentanyl dust may be difficult to see, but it is deadly and is one of the largest exposure risks associated with a distribution lab.

Fentanyl dust is extremely fine – along the lines of powdered sugar. The amount of fentanyl it takes to cause an overdose varies by person, but is such a minuscule amount that it could not cover a newborns pinky nail. Carfentanil, a derivative of fentanyl that is commonly used as an elephant tranquilizer, is 100x more potent and requires an even smaller amount.

When fentanyl in a powder form is processed for sale it is generally cut into other opioids to increase their potency or bulked up with inert substances so that it may be packaged or milled. Regardless of which method is chosen, many distributors use the same method to produce a homogeneous mix – a kitchen blender. The violent blending can raise a fair amount of dust in the process, coating surfaces, carpets, clothing and anything else uncovered in the area. 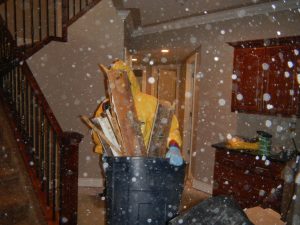 Fentanyl dust can remain in the air for long periods of time, swept along by air currents until it settles. After the distributors have been removed, the dust remains. Regardless of whether it is airborne when you enter the home, it is easily re-aerosolized by air currents. The simple act of opening the door to let yourself in sends dust settled on carpets, tables and curtains back into the air.

Breathing in enough dust can cause intoxication, overdose or death – and there is no safe way of telling when enough is enough. This is why it is important that anyone exposed to airborne fentanyl dust wear a face mask that covers the nose, mouth and eyes – so that the dust does not come into contact with your lungs or mucous membranes through which it may be absorbed. It is also important to recognize that aerosolized dust may settle on your skin, hair and clothing and become airborne again at a later time. Wearing a full hazmat suit helps to protect you and those you come in contact with you from delayed exposure.

Exposure to fentanyl during a user site or drug lab remediation is extremely dangerous. For more information on the risks, please contact us online or by phone at (888) 801-0911 today.